Weddings... One is Enough

Written by Victoria Hommelhoff on 16 December 2016. 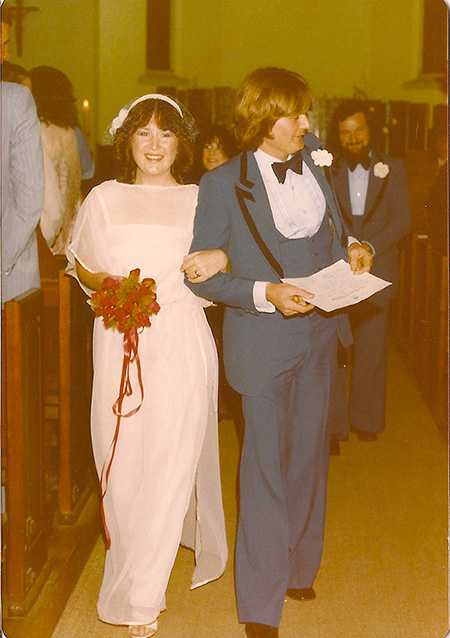 I got married once. It was such a terrible experience that I have vowed to stay married ’til death us do part because I never ever want to go through that again!

I am what you might call ‘very’ married. Coincidentally, so is my husband. Back in 1977, I had returned home from my big trip overseas and to the bosom of my loving family. While I’d been away, Mum and Day had upped and moved from Geelong and headed for the hills. So home was now up Upwey way.

One dark and stormy night there was a knock on the door. I hauled our booming Irish setter watchdog away and opened the door, where stood Mr Tennis Club Secretary from the tennis club I’d just joined. More significantly, next to him stood Mr Tennis Club Secretary’s best mate. Best mate looked at me, and I looked at him and we fell instantly in love. Yes, it does happen!

From then, there was an ensuing action-packed, drama-filled, often blissful time of 18 months that, if included here, would take up all of Ruby’s precious pixels, so I’ll cut to the chase. Literally.

By then, Mum, Dad and I had moved from Upwey to Parkville and ‘best mate’ and I were officially boyfriend and girlfriend. One fateful day there was a big row – we never rowed – and he quietly said he’d had enough. There was a thunderstorm happening, both figuratively and meteorologically, and he strode purposefully out into it. I heard his car start and drive away … I couldn’t bear it. I ran out into the rain and chased his car out of the carpark, banging on it and shouting, “No! Stop!”

The rain was torrential and I was drenched within seconds, but more than that, I was scared that I was about to lose the best best mate anyone could wish for. I had one chance; he stopped the car but still fixed his gaze straight ahead. I shouted through his closed car window, through the pouring rain, that I was sorry, really sorry, oh and would he marry me. He turned and looked at me. I said it again. “Marry me. Please will you marry me?” He wound down his window and he half smiled, half laughed and nodded and said, “Okay”. And so, amidst the thunder and lightning and pouring rain and pure relief, I half climbed in through that car window to him and we sealed it with the most passionate, romantic kiss that ever was.

So, you’d think with romance like that throbbing through our veins that our wedding would be something pretty amazing, right? Wrong! Our wedding was awful.

First of all, I desperately wanted to get married on May Day, like my Mum and Dad had, 30 years earlier. That gave us a mere six weeks until the big day, so the hurried invitations went out and everybody thought I must be pregnant. And the first of May 1979 was a Tuesday. So it would have to be an evening wedding, because most of the guests would be coming from work. And the church that we chose (actually, I chose it) was St Carthage’s in Royal Parade Parkville. Put all that together and you get a perfect storm of a wedding taking place in one of the blackest spots and worst times for peak hour traffic. 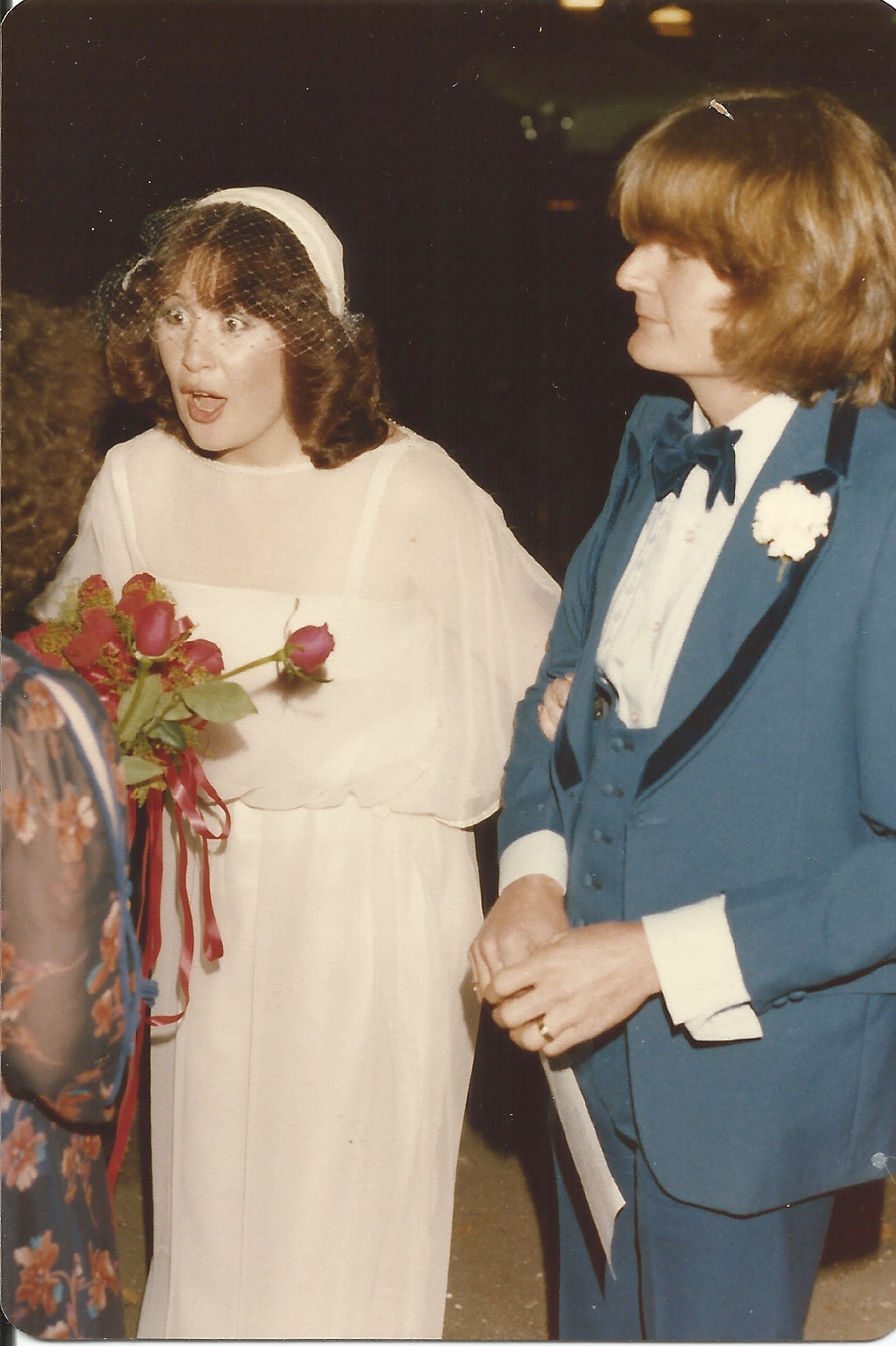 “Hurry up lass, you’re going to be late!” Dad was yelling at me, not to get the school bus like he’d done every weekday morning between 1964 and 1975, but to get me into the wedding car. Just as we were about to walk out the door on time at 5.50pm, the phone rang. It was Uncle Frank and Uncle Harry calling from Manchester, wanting to wish me well and have a bit of natter, as they were wont to do. Finally, Dad took the phone from me saying, “Eh lads, she’s already late!” and hung up. We left. The usual five-minute drive took over half an hour.

Getting into the church was problematic too. For a start it was a clearway, so all our guests copped parking fines, which were fluttering on the windscreens like bridal ribbons. Plus, the automatic sprinklers had come on so I had to hitch up my pristine frock and jump across the muddy nature strip amidst all the peak hour traffic tooting horns at me. I was 45 minutes late for my wedding and everyone was either cross, bored or convinced I’d done a runner. My beloved’s reproachful look still haunts me.

At last, actually inside the church, there was much talking, some crying and a lot of stifled giggles coming from the pews. Poor Mum was minding my four year-old nephew. Laurie had recently started kindergarten and discovered that saying the F-word got a great response out of pretty much everybody who heard him. He could impress his friends and shock his family all at the same time – and he did. He’d had many talkings-to and was on strict “no F-word” instructions for this special day. He had been very good until poor Mum – Grandma – thought she’d pre-empt anything by saying, “Now Laurie, Anna-Marie is going to be here and you know you must be very quiet.” Immediately, he started crying indignantly; “But Grandma, I didn't say f*ck”, he howled.

The groom’s side of the church was filled with some frighteningly respectable and nostril-flaring people. Mum was mortified at the impression they were getting of the usually socially acceptable Hughes family. She leaned forward to quickly reassure Laurie, saying, “Yes, I know you didn’t say it, love. But don’t say anything at all.”

Behind them, six year-old nephew, Eddie, concerned at the goings on, leaned forward said, “What's wrong with Laurie?” Laurie loudly replied, “Grandma said I said f*ck, but I didn't say f*ck,” and Eddie went out in support of his cousin saying, “I didn’t hear him say it, Grandma.”

Dad and I looked at each other. Even back in the entrance, we could hear Laurie proclaiming, as only an innocent kid can - for all the world to hear - “But I wasn't going to say f*ck until you said it, Grandma!” My poor Mum.

The organ started playing and Dad and I finally stepped forward on that long, long walk down the aisle towards the restless guests, annoyed priest and my grumpy groom. As we did, my three year-old niece, who had been angelically sitting beside Grandma, suddenly broke ranks and leaping out into the aisle followed us on her knees while holding her ankles up from behind, calling out, “Look at me, Anna-Mwee! Laurie’s vewy bad. He said f*ck!” 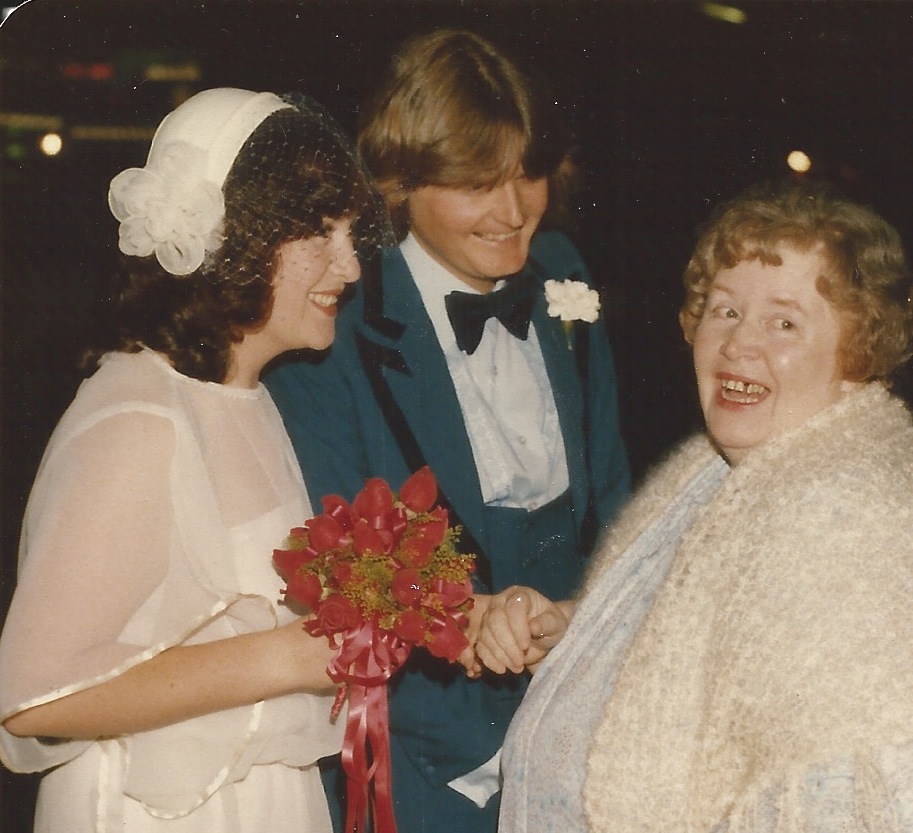 Finally we each said “I do” and we trooped outside where the guests discovered their parking tickets under their windscreens. A few tore the pretty pink paper slips up into little pieces and threw them at us along with the confetti ...

The reception was held in an old bluestone pub where boozy old homeless men, on their way to the conveniently located refuge nearby, snuck in and availed themselves to the open bar. Ah well, it didn’t matter. There was something for everyone on that crazy night.

We still don’t know who was responsible but the juke box got switched on and the first song that played was the classic love song guaranteed to stir the soul – “Up There Cazaly”. It filled the room and everyone enjoyed the joke and sang along. We laughed when it finished, but then we heard the words again, “… Well you work to earn a living …” It played over and over. We did everything we could to find out how to turn off that thing but couldn’t. It was possessed by the spirit of Mike Brady that still endures today and, 36 years on, whenever we hear it, we turn to each other, point rudely and say through gritted teeth: “Never ever  marrying you again”.